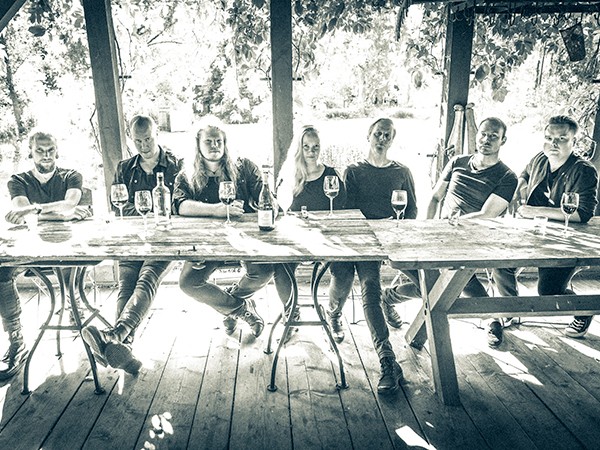 The second song of the album perfectly symbolizes the musicality and aesthetics of HANGING GARDEN: ‘Fear, Longing, Hope And The Night’. The band from Helsinki plays with a certain melancholy, disillusionment and gloomy structures, as well as with restrained optimism, harmonies and an overall (dark) warmth. The cautiously developed atmospheres are central to the group’s new album “Into That Good Night”. During the time of their existence, HANGING GARDEN, which were founded in 2004, have developed a graceful and universal sound between dark rock and doomy metal, which works through the transported moods, which often resonate subliminally. Following “At Every Door” (2013), “Blackout/Whiteout” (2015) and “I Am Become” (2017), “Into That Good Night” is HANGING GARDEN’s fourth album for German Lifeforce Records, the sixth of the Finns in total. Riikka Hatakka has become an official band member and naturally expands the possibilities with regard to vocal expression and variability. Singer Toni Toivonen explains his main ideas for the lyrics of “Into That Good Night”, which, of course, are reflected in the music of the new HANGING GARDEN album as well: “With the times being what they are, the collapse of modern civilization is beginning to look more plausible: mankind seems to be doing its best as a species in making our habitat inhabitable for ourselves. Channeling the deep and numbing melancholy induced by our present reality, HANGING GARDEN’s new album “Into That Good Night” makes a journey to our near future, to a world where the aforementioned collapse has recently taken place. How would we survive? What would we hold dear, and what would lose its purpose? The album portrays themes of loss, longing, death and hope through narratives and musings of nameless, fictive survivors in a world devoid of the safety brought by modern organized society, wealth or civilization - a future that doesn’t seem so distant anymore.”